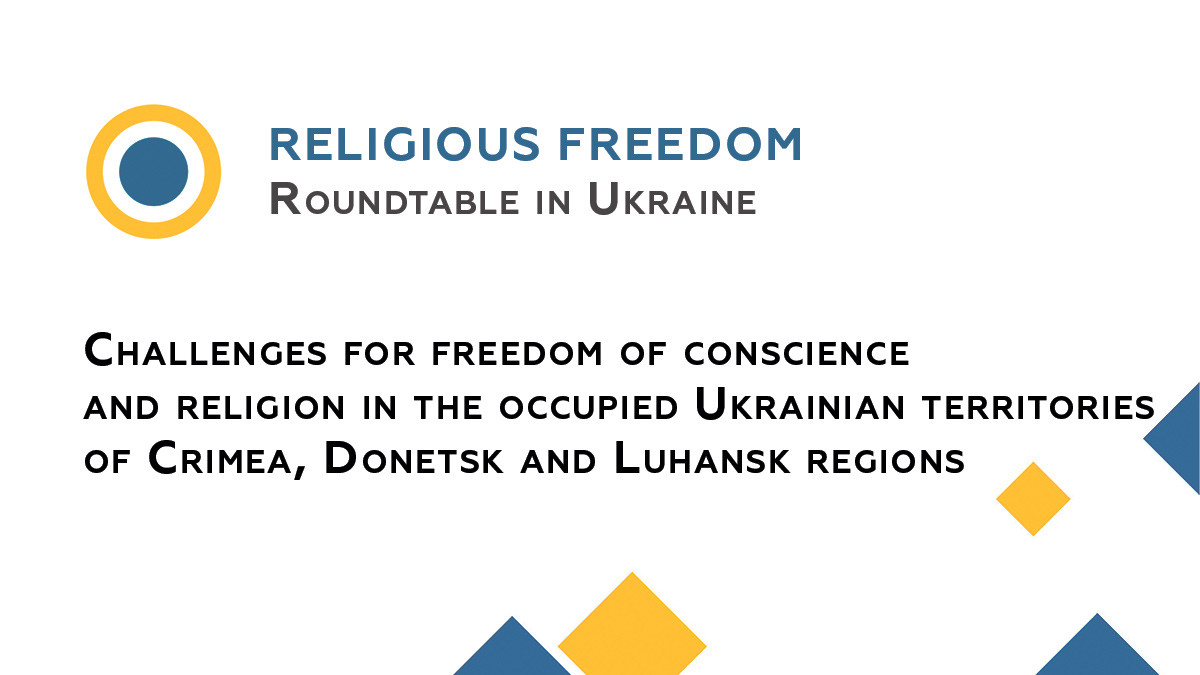 Resolutions on challenges for freedom of conscience and religion in the occupied Ukrainian territories of Crimea, Donetsk and Luhansk regions

The first Resolution of the Religious Freedom Roundtable in Ukraine of April 17, 2019 described in detail the consequences of the Russian occupation. It led to numerous violations of religious freedom in the temporarily occupied territories of Crimea and parts of the Donetsk and Luhansk regions in the east of Ukraine.

Unfortunately, the situation has only worsened over the years. The space for a person to practice their religion is narrowed, the ability to perform divine services for several churches and religious organizations is prohibited, and the right to study or observe religious practices and rituals is grossly leveled.

There is a growing number of illegally imprisoned people for religious reasons, who do not have any effective protection within the national system of the Russian Federation and in the territories under its control. In occupied Crimea, Crimean Tatars are being subjected to targeted religious persecution, many of whom have been arbitrarily arrested and sentenced to prison by the Russian authorities, on grounds of fabricated accusations of extremism. The Orthodox Church of Ukraine is under constant pressure, fighting for the right to worship in its own churches. The number of prison sentences for Jehovah's Witnesses believers, a religion banned in the Russian Federation, is increasing. Their number in Crimea is estimated to be 8,000 persons.

In general, the Russian Federation's anti-extremist and anti-terrorism legislation contradicts international standards and is used primarily to persecute dissidents, both in occupied Crimea and in Russian-controlled territories in the east of Ukraine.

The occupying power in Crimea views freedom of religion as a collective category that depends on the level of loyalty to the Russian government. In the occupied territories of the Donetsk and Luhansk regions, many religious communities of various denominations have simply ceased to exist and the right to freedom of thought, conscience, and religion has been absent since the Russian Federation took actual control of the territories. In addition, dozens of religious communities, mostly Protestant Evangelical, are deprived of the opportunity to use their own churches and houses of worship in the east of Ukraine, seized by illegal military formations supported by the Russian Federation.

All this leads to the fact that believers of certain denominations living in these occupied territories are forced, as in Soviet times, to gather underground to be able to pray together, study the basics of their faith and perform religious rites.

In view of the above, the participants of the Religious Freedom Roundtable in Ukraine state the need for a complete de-occupation of the Ukrainian territories of Crimea, Donetsk and Luhansk regions, as a guarantee of stopping gross violations of religious freedom.

We call on international organizations, UN member states, the World Council of Churches, and other international and interreligious institutions to:

1. Continue and strengthen measures of diplomatic and economic pressure on the Russian Federation demanding the de-occupation of the Ukrainian territories of Crimea, Donetsk and Luhansk regions and an end to the attack on freedom of thought, conscience, and religion, as well as the immediate release of all Ukrainian citizens imprisoned on the grounds of professing their religious beliefs, which is a direct violation of Article 9 of the European Convention on Human Rights;

2. Initiate the preparation of a public report on the state of ensuring freedom of thought, conscience, and religion in the occupied Ukrainian territories of Crimea, Donetsk and Luhansk regions to present it at specially organized hearings at the UN, Council of Europe, OSCE, EU, and USA;

3. Appoint an EU Special Representative for the occupied Ukrainian territories of Crimea, Donetsk and Luhansk regions to monitor the human rights situation on a permanent basis and to report periodically to the Council of the EU on the state of affairs.

by the participants of the Religious Freedom Roundtable in Ukraine, namely:

4. All-Ukrainian Union of the Churches of Evangelical Christians-Baptists

7. Religious Administration of Muslims of Ukraine

11. Religious Administration of Muslims of Crimea

13. Association of Missionary Churches of Evangelical Christians of Ukraine

12. Institute of State and Church

This Roundtable's meeting was organized by the Institute for Religious Freedom in cooperation with the Center for Civil Liberties with the support of the Embassy of the Kingdom of the Netherlands in Ukraine. It was arranged in the framework of the IRF project "Mobilization of international community to end identity-based persecution in the non-government controlled areas of Ukraine" and with the support of the American Bar Association, and the Rule of Law Initiative in the context of the CCL project "Promoting Social Cohesion in Ukraine".