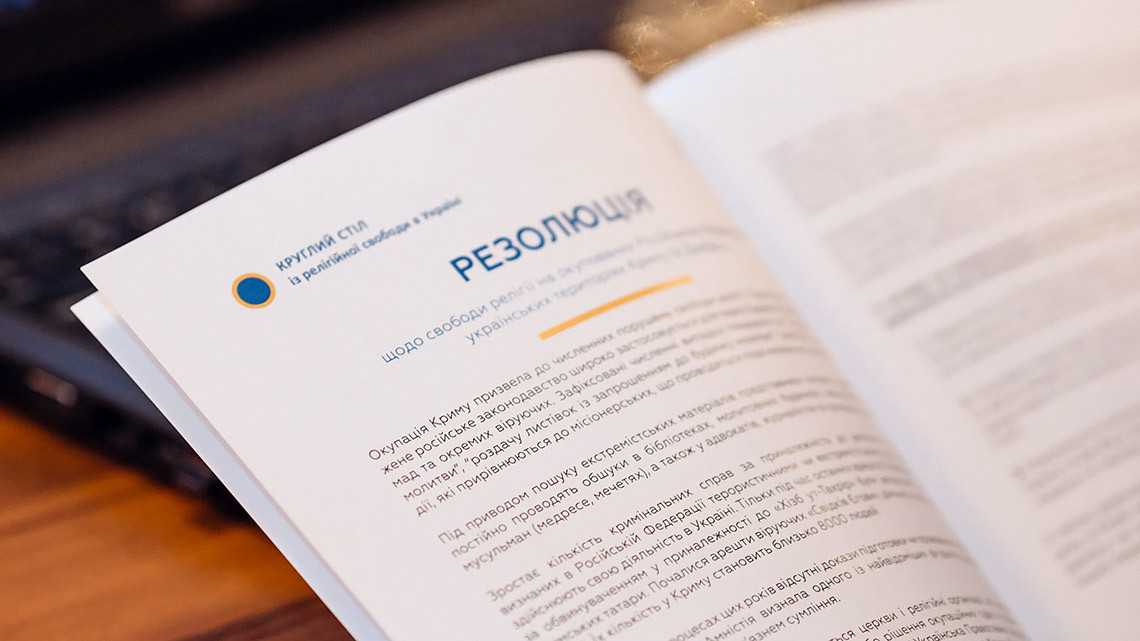 The annexation of Crimea led to numerous violations of religious freedom. The forcibly imposed Russian legislation is widely used to persecute religious communities and individual believers. There have been documented a lot of cases of punishment for “reading the Bible and prayers”, “distributing leaflets with an invitation to a prayer house”, “religious songs” and other activities that are equated with the missionary ones held outside the designated places.

Under the pretext of searching for extremist materials, representatives of law enforcement agencies in Crimea are constantly conducting searches in libraries, prayer houses, Muslim schools (madrassas, mosques), as well as at lawyers, journalists, and public activists. At least 16 cases of attempted arson, robbery, desecration of mosques were documented, while only in one of them they managed to find a guilty person. In mosques, cameras are installed to monitor Muslims.

The number of criminal cases for membership in religious organizations recognized in the Russian Federation as the terrorist or extremist ones is growing, although they freely carry out their activities in Ukraine. Russia’s so-called anti-extremist legislation contravenes international standards and is used for groundless accusations and persecutions of believers and religious communities. 24 Crimean Tatars were imprisoned on the charge of belonging to Hizb ut-Tahrir only during the last arrests on March 27, 2019. The arrests of members of Jehovah's Witnesses began, whose activities are prohibited in Russia, and their number in Crimea is about 8,000.

In all court proceedings of these years, there is no evidence of preparation or conduct of terrorist acts. Amnesty International recognized one of the most prominent participants in the fabricated cases Emir-Usein Kuku as a prisoner of conscience.

Churches and religious organizations associated with Ukraine are in critical condition. Due to seizure or the decision of the occupation courts they were deprived of the right to ownership of religious buildings. Thus, before the occupation, the Ukrainian Orthodox Church of the Kyiv Patriarchate (now the Orthodox Church of Ukraine) had about 50 religious organizations in Crimea. As of March 2019, their number has decreased to 9. Now the occupation authorities are trying to deprive the OCU of the premises of the Cathedral and the Diocese in Simferopol.

Even worse is the situation with the observance of freedom of religion in the occupied part of the Donetsk and Luhansk regions (Donbas) in eastern Ukraine. Since the beginning of the war, the illegal armed formations created by the direct participation of the Russian Federation proclaimed the Orthodoxy of the Moscow Patriarchate as the main religion of the region and began the persecution of other religious denominations.

Dozens of temples, prayer houses, and places of worship have been captured and are now under the control of armed formations. The practice of abduction, torture, and extrajudicial executions of clerics and believers of the Orthodox Church of Ukraine (formerly the UOC of the Kyiv Patriarchate), the Ukrainian Greek Catholic Church, and a number of Evangelical Protestant churches is widespread.

As a result of the deliberate policy of terror by the occupation authorities, which copies the judicial arbitrariness and repressive laws of Russia, most clergy together with their families left the region. Somewhere, like the times of the Soviet regime, believers of certain denominations are forced to gather underground in order to have the opportunity for joint prayers, studying the doctrines of their religion and the holding of religious ceremonies.

The new challenge was the demands of the occupational authorities of Donetsk and Luhansk concerning the mandatory re-registration of religious organizations, the failure to fulfill which entails criminal liability. Prior to this, there was a total ban on the activities of religious groups, which include all communities of believers not belonging to the “traditional denominations”, the list of which is not defined.

We have to admit that the occupation authorities in Crimea do not recognize the freedom of religion, but consider it as a collective category, depending on the level of loyalty to the Russian authorities. At the same time, most of the religious communities in the occupied territories of Donbas simply ceased to exist, and freedom of thought, conscience and religion is non-existent as such.

In view of the above, the participants of the Religious Freedom Roundtable in Ukraine state the necessity of full de-occupation of the Ukrainian territories of Crimea and Donbas as a guarantee of the cessation of gross violations of religious freedom, and also appeal to international organizations, the UN member states, the World Council of Churches and other interreligious institutions for the following:

1. To appeal to the Russian Federation demanding the de-occupation of the Ukrainian territories of Crimea and Donbas and the cessation of their offensive on the freedom of religion, as well as to immediately release all citizens of Ukraine, prisoners on the grounds of professing their religious beliefs, which is a direct violation of Article 9 of the European Convention on Human Rights.

2. To initiate the preparation of a public report on the state of ensuring freedom of thought, conscience and religion in the occupied Ukrainian territories of Crimea and Donbas in order to present it at specially organized hearings in the UN, the Council of Europe, the OSCE, the EU and the USA.

3. To appoint a EU Special Representative for the Occupied Ukrainian Territories of Crimea and Donbas to carry out continuous monitoring of the human rights situation and periodic public reporting to the EU Council on the state of affairs.

In order to co-operate in solving this and other issues, the participants of the meeting on April 16, 2019 in Kyiv decided to launch a Religious Freedom Roundtable in Ukraine for the purpose of dialogue on a regular basis between representatives of different denominations and human rights and non-governmental organizations that support the importance of religious freedom, with the involvement of scientists, experts and representatives of the national authorities and local government bodies.

by the participants of the Religious Freedom Roundtable in Ukraine.

4. All-Ukrainian Union of the Churches of Evangelical Christians-Baptists

13. Religious Administration of Muslims of Ukraine

14. Religious Administration of Muslims of Crimea

19. Religious association of communities of progressive Judaism of Ukraine

20. Association of Missionary Churches of Evangelical Christians of Ukraine

16. Association of Relatives of Political Prisoners of the Kremlin

21. Institute of State and Church

23. Community of St. Egidius in Kyiv